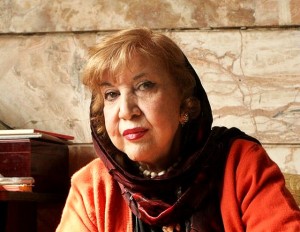 s a message to all the Iranians in Iran and all over the world.  It is with deepest regret and sadness we must inform you of the passing of Simin Behbahani; a poet, scholar, humanitarian, a true champion of human rights for all Iranian women.  My Auntie Simin is survived by two sons, Mortaza, Hussein, and a daughter Omid.  She is also survived by six grandchildren and four great grandchildren.  My Auntie Simin was a woman ahead of her time.  She was raised by her mother, Fakri Arghun Khalatbari.  At the early age of 14, my aunt figured out that she was a special person and she was truly born into a royal family.  She learned that her mother was a great poet, newspaper editor, and a great leader.  My Auntie Simin has written over 20 books and produced over 4500 poems that have been translated into many languages and they will always be part of our heritage. My Auntie Simin was nick-named the “Lioness of Persia”.  She was nominated two times for the Nobel Peace Prize in Literature.  She was also an icon in the Persian community.  She stood for human rights and equal rights for all the women of Persia. When the Iranian revolution came to power she was the voice of the people with her poems and actions; she was always protecting the innocent. As I was growing up in Iran, I remember every Nowruz we used to all get together and take food and money to feed the hungry and cloth the needy.  With her smile and generosity she set an example for all of us in all of our generations.  As the revolution cracked down on poets, musicians and scholars, as they fled Iran for their lives, only my Aunt stayed and said I am not leaving without a fight, this is my land, my home, this is my heritage, this is the land of my ancestors, and this is where I will always live.  As a poet she touched many lives.  As a mother to all Persians she touched all our souls.  As the revolution was trying to put out the fires in our souls she stood up even when she was beaten, jailed and punished, and her passport removed, and she was no longer allowed to leave the country.  She sent a clear message that “I am the voice of freedom, I am the voice of the people, and I will not allow anyone to take power over me”. One of the saddest moments in my Aunt’s lifetime was when the Iranian Women’s Soccer Team was disqualified from the World Cup Soccer Tournament.  She was saddened because the only crime the women committed was to have a scarf over their heads. As a person, she kept it to herself but you could always see the pain in her face because it was one of the saddest moments in Persian history. By the order of Ali and the people of Persia, on this date, August 19, 2014, forever will be a National Holiday and be known as Simin Behbahani, Poet and Humanitarian of Persia.

“My homeland, I shall build you again

With bricks of my soul.

I shall raise your pillars again

With pieces of my bone”

We are born free, we must live free and we will die FREE.

May God rest your soul in the heavens my Auntie Simin and may all that you dreamed about on earth come true for all; and may God in the heavens keep you safe until we all meet again. For now, I will see you every night, in the skies, as a shining star that you have always been.

God bless you and love from all of us.